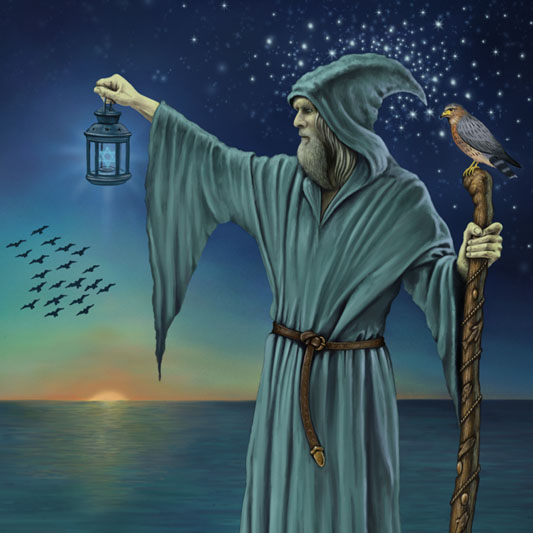 They do say be careful what you wish for. Leading up to the commission to produce the art for the Celtic Tarot, I’d been wanting a job I could really get my teeth into. It had been a few years since I’d had commissions of scale like the Crafter’s Design Library books, which had taken around six months each to do. The Celtic Tarot took nearly three years. Slightly more than I was thinking of.

The approach from the Llewellyn to see if I would be interested in illustrating a Tarot project came completely out of the blue. Up until that point I had always said that illustrating a Tarot was too much work for too little money. Once I had read the proposal by the author Kristoffer Hughes, I was completely hooked. I knew I had to illustrate the deck.

Before I got the contract, I had to produce two paintings of specific cards from the deck to make sure it would work. Once past that hurdle, it was all systems go. One of the first things I did was split the job in half. Put one mass of pictures aside and and basically deal with them later. It made the job appear more manageable. There were some simple numbers I liked to bandy around. If I added one hour to each painting that adds two weeks to the final job. If I added a day to a painting, that adds three months. I would have to stay on the case and not let things slip. On a job of this scale once it slips it is hard to pull back.

By the end of the project, I had thousands of images filed away with all the different reference images, sketches, development images and of course the final paintings. At the beginning there was a simple open vista of possibility. Decisions of style of content which once made would be set in stone. Again the scale of the project meant no changing of mind half way through about how it looks.

This all sounds very cut and dried. There had to be that undercurrent to make it work. But what I always held above all else was that what mattered most were the people who would use the cards once finished. Doing nice images and getting them in on time was all well and good but if people could not read from the cards, it would have been for nothing. Yes, there is a decorative element to the cards but they are so much more than that. My real driving force was they had to work on a day to day level for people I would never meet but for whom the cards would take on a level of importance. This was quite a responsibility and one which I never forgot.

I could not have completed this tarot without the help of the many friends who were willing to pose for al the different characters in the deck. Myself and Kris decided that we do not name the people as we wanted those using the deck not to get distracted by who the person playing a role was but in the character they were playing. So they will remain the unsung heroes of the deck.

The deck was a constant collaborative process between myself and Kris. I told him at the beginning that I saw my role as realising his vision and so everything was passed by him to make sure he was satisfied and each card worked for him. The process of refinement was ongoing and over the two and a half years or so we were in contact most days, often several times a day to get this right.

Feedback about the deck has been really good. Less than a year after it was published it has already been reprinted. Which is so heartening after the considerable amount of work which went into it. It is wonderful to see it out in the world being used and appreciated.